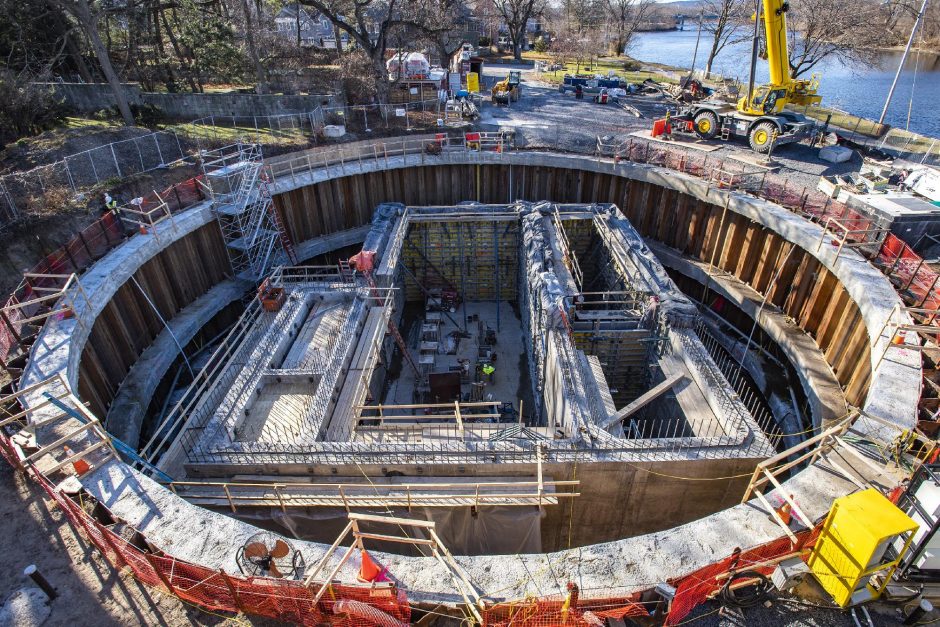 The convoy of roughly 30 vehicles was headed to the site of the city’s new sewage pump station, the city’s largest ongoing infrastructure project — and one nearly a decade in the making.

Work is underway on replacing the current station along the Mohawk River, which was breached by flood waters during Tropical Storm Irene in 2011 and later slapped with a state Department of Conservation consent order requiring the city to bring mechanical components above the floodplain.

The present facility collects between 4 and 6 million gallons of waste each day, from not only the city, but also the Village of Scotia and industrial parks in Rotterdam and Glenville.

From there, a new underground gravity-fed force main carries waste under the statue Lawrence the Indian, along Front Street, through Mohawk Harbor and to the city’s Water Treatment Plant on Anthony Street in the city’s Northside.

“This is a critical station,” said Paul LaFond, the city’s commissioner of general services. “A lot of people don’t know what the city of Schenectady’s treatment plants are doing.”

Workers have bored 40 feet into the ground and poured nearly 100 tons of cement into the ring-shaped pit for the sub base.

A convoy is slated to make a third pour next week.

Eventually, an L-shaped building will be constructed over the top, skirting the existing location, which dates back to 1913, and will be decommissioned following the project’s completion.

The new plant is part of a three-phase project clocking in at $50 million, which has been cobbled together through bonds and a $3 million state grant. The building itself has a $22 million price tag, with $11 million slated for the force main and the remainder allocated for upgrades to the treatment plant, which treats roughly 12 million gallons daily.

LaFond hopes the project will be completed by September.