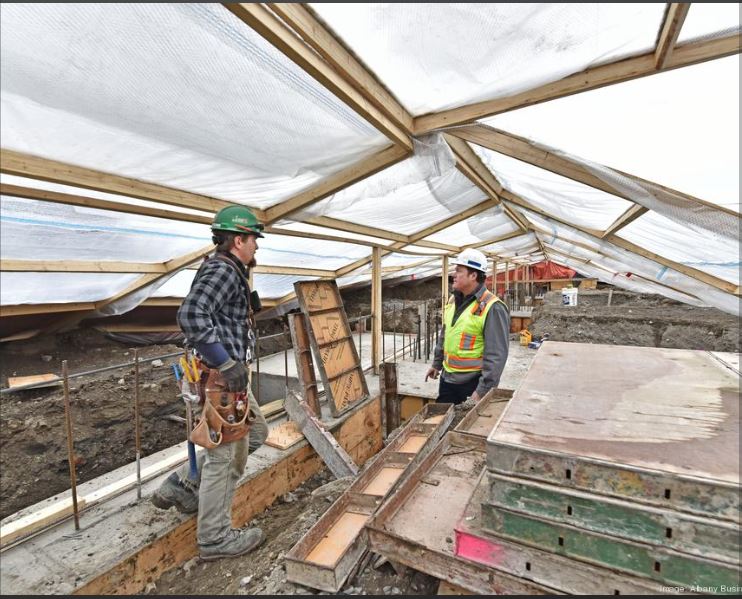 The Port of Albany: Giving GE a reason to stay

General Electric Co. imported enough generators, transformers and turbine parts through the Port of Albany last year to load 100 rail cars with parts so heavy, welding was the only safe way to secure them. Chains and straps just wouldn’t do.

Even during a year when General Electric exports were down, the port stayed busy as GE shipped machines from China, Vietnam and Brazil into Albany to rebuild power plants throughout the United States.

“During the toughest times, GE has always been the staple that keeps us afloat,” said Rich Hendrick, general manager of the Hudson River port.

Longshoremen logged 62,000 hours last year, docking, loading and unloading ships and barges at the Port of Albany. Cargo from GE accounted for half that work.

Despite the increase, there is a sense of urgency at the port following a tumultuous year for General Electric — the port’s largest customer. The manufacturing conglomerate, which builds everything from jet engines to wind turbines, employs 7,000 people in the Albany region. GE is in the midst of a major overhaul after its stock price fell by 45 percent.

First-year CEO John Flannery responded by ordering a $1 billion cut to Schenectady-based GE Power’s annual budget. Now, GE executives are deciding if they should sell large portions of the business and split the company into much smaller pieces.
All of this creates uncertainty whether GE will continue to use the port as a significant pipeline for getting products from the factory floor to the customer.

“There will be a GE in the future, but it will look different than it does today” Flannery said this week, as the company announced a $9.8 billion loss for the fourth quarter.

The Port of Albany has a strategy to help keep GE in the region. The port is investing $50 million to cement its role as a premier transportation center for heavy cargo in the Northeast. The goal is to preserve its relationship with GE by making it cheaper and easier for the company to ship products through Albany.

“We want to make this place their main transportation hub,” Hendrick said. “We have to give them every reason to stay in New York state.”
The 320-acre port sits at the southern tip of Albany on the banks of the Hudson River. A network of warehouses, grain elevators and fuel tanks are visible to 53,000 commuters who travel along Interstate 787 each day. Despite the highly visible location along the Albany waterfront, few people realize the magnitude of products that are shipped through port each year — hundreds of thousands of tons of molasses, scrap iron, wood pulp and calcium chloride.

Port of Albany by the numbers

Product diversity is one of the keys to the port’s success. But Hendrick and the commission that manages the port believe the ability to handle heavier equipment will position them for the future.

That was the motivation behind the port’s decision to hire Jersen Construction in Waterford to build a 45,000-square-foot heavy-lift cargo warehouse. The warehouse is a signature piece of the port’s plan to increase capacity and elevate its stature as a destination for shipping heavy and complex cargo. It is scheduled to be finished this summer.

The port also hired Harrison & Burrowes of Glenmont to replace a section of dock the length of three football fields. The two projects will allow the port to handle turbines and generators weighing in excess of 1.2 million pounds as GE introduces its next generation of larger, more powerful products.

GE executives encouraged Gov. Andrew Cuomo to provide funding for the port investments more than two years ago. At the time, the company was considering using barges to ship turbines from Schenectady to the port to save money on rail.
Hendrick also is negotiating to buy land in Bethlehem or East Greenbush to expand the port. He wants to purchase property to convince more manufacturers to lease space and build warehouses to increase the $3.2 million that the port collects each year in rent.
“When these investments are finished at the terminal, I would like to think GE would see us as a key to their future,” said Bill Ring III.
He is the general manager of Federal Marine Terminals in Albany. Ring’s company oversees shipments at a dozen U.S. and Canadian ports from Lake Charles, Louisiana, to Eastport, Maine. During his 23 years as general manager, Ring remembers when cocoa beans were the main commodity moving through the port.

Ring moved to Albany in the years when the port was recovering from the loss of its two biggest customers. At one time, Chiquita Brands shipped 150,000 cases of bananas a week into the port. The other big customer was Volkswagen, which brought 20,000 or more cars a year through Albany. In 1989, both companies decided to move their business to other ports. Chiquita headed to Delaware. Volkswagen picked Rhode Island.

Over the past decade, grain shipments, wood pulp and heavy cargo have become the backbone of the Port of Albany.
Business has picked up, Ring said, because it is much easier for manufacturers to ship products through Albany instead of contending with long delays at the Port of New York and New Jersey, where truck drivers can wait eight hours or more for cargo to be located and loaded.

Longshoremen at the Port of Albany worked 17,000 more hours in 2017 than the previous year. The increase came as GE and other manufacturers imported more heavy equipment. That increase helped the port have a solid year, offsetting a decline in tonnage handled. A decrease in grain shipments accounted for the dropoff.

Hendrick and the port also have a strategy to help flour producer Ardent Mills expand its business at the port. The company supplies millions of pounds of flour to bakeries, restaurants and distributors.

Ardent Mills uses a grain elevator that was built before the port opened in 1932. Hendrick is negotiating with the company to find a way to replace the grain elevator with new equipment.

“That could have a big impact on their business and bring more work into the port,” Hendrick said.

The Port of Albany handles more tonnage than several other inland ports including the Port of Milwaukee on Lake Michigan and the Port of Stockton on the San Joaquin River in California.

Meanwhile, the Port of Cleveland on Lake Erie is almost twice as busy as the Port of Albany.

That said, the Port of Albany accounts for approximately 1,400 jobs and roughly $80 million in annual payroll.

The importance of investing and working to ensure that GE remains a large customer at the Hudson River port is not lost on Joe Martin, president and owner of C. Springer Welding Works & Marina.

Martin is the fourth owner of the 110-year-old welding company. One of the biggest pieces of his business is the work his welders do securing generators, transformers, wind turbine blades and other parts when GE ships cargo in and out of the port.

“Everyone knows, we have to do whatever we can to keep our costs down to support GE because they are so important to the success of the port,” Martin said.

C. Springer Welding Works got out of the equipment repair business and spent $100,000 buying new welding machines last year.
“We have to have good equipment and make sure we are ready to go every time they need us,” Martin said. “It is that important.”

What’s next at the Port of Albany
Two new projects are in the works that would allow for the shipment of heavier equipment through the port: a new warehouse and a replacement of a dock built more than 80 years ago. Port management is also looking at buying more land to take on more tenants.